Star of the North 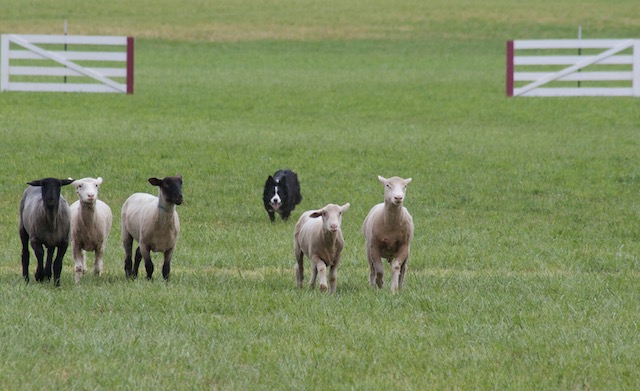 The Star of the North Stockdog Trials are a series of competitive sheepdog trials where stock dogs work with their human partner to shepherd a group of sheep around a course that comprises elements of the types of work found in farm work. The teams compete in different classes matching the experience of the dog and the shepherd to the size of the course. The most advanced class is the Open class which, as the name suggests, is open to any dog or handler to enter. The dogs will be asked to fetch between three and five sheep from approximately 500 yards and bring them on a straight line to the handler who must remain at a post set in the ground. The "Fetch" must be straight, at a steady moderate pace, and bring the sheep though a set of gates 150 yards from the handler. The dog will then be asked to drive the sheep away from the handler around a triangular shaped course 400 yards long passing through two additional gates. The sheep will then be brought into a circle 40 yards in diameter where one or two sheep will be separated from the others as required by the judge. The sheep are then rejoined and placed in a pen.

The handler directs the dog using a series of voice or whistle commands.

The team starts with 100 points, and a judge will deduct points if dog or handler deviates from the ideal line or standard of work. The course must be completed in the time allowed for full points but no bonus is given for finishing quickly.

The work is designed to test the ability of the dog and handler to perform the types of tasks that might be necessary to efficiently work stock on the farm or ranch with a high degree of care for the sheep which defines stockmanship. The dogs are competing on neutral ground and with flocks they are not familiar with to level the playing field. The trials are used to test the abilities of the dogs and identify the most skilled and talented sheepdogs.